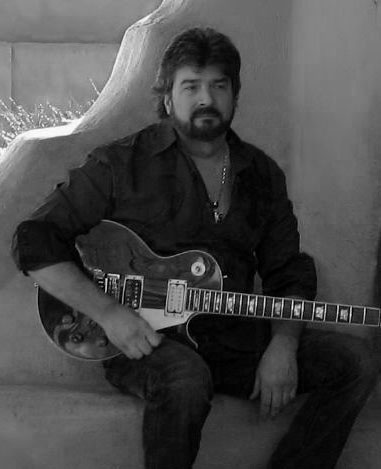 Danny Vash and Nite Wolf are a three-piece power trio from the Albuquerque New Mexico in the south-west United States. Their hard-hitting sound is a combination of Danny Vash on lead guitar and vocals, and the Nite Wolf duo Bill Weber on drums and Mike Alberts on bass. Together they grind out crunchy riffs, complex melodies and songs with a classic hard rock sound. Danny Vash writes all music and lyrics. Their first album “TAKIN’ CONTROL” was recorded and produced by Danny Vash and Mike Alberts at their studio, in the Sandia mountains of New Mexico.

Vash has musical roots that started in the San Francisco Bay Area. He has played with several of northern California’s top hard rock and metal bands, before moving to the south-west. He has shared the stage with a number of national acts and helped produce CDs for several local musicians in Albuquerque New Mexico. 2015 was a stellar year for the songwriter, as it provided many opportunities for him to belt out mind-bending songs with screaming guitar work, and strong vocals with catchy hooks.

Danny Vash and Nite Wolf paved their way into the global rock scene with their the success of their 2015 release “TAKIN’ CONTROL”. The first song from the album won “Best hard rock song of the month” award with the Akademea of music in Hollywood California. The band’s fan base was a rolling stone, and gained the trio global notoriety. Their song ‘Passion Dreamer’ was picked up by Berkshire Media Group and affiliates, along with the AKADEMEA of music including radio program directors of various FM networks and worldwide networks. This was one of the key events that has been driving all the radio play for the trio! With these two great companies behind Vash and friends, radio play happened fast and has not stopped.

All of this activity snowballed into increasing heavy rotation throughout 2015 for “Takin Control”, and the momentum shows no signs of stopping even now. Good music gets played, and we now know that rock has a heart and soul firmly within New Mexico. Vash was committed to pushing his brand of hard edged rock to the world.

In November 2015, Danny was picked up by leading indie label Blue Pie Records USA and was signed to a global distribution and publishing admin agreement. The label dropped the second album in April 2016, called “Hard Life”. The eponymous track of the album was treated to a hectic music video by another of Blue Pie’s excellent multimedia artists, that being the one and only Soularflair.

As the CEO of the label Damien Reilly says:

“It is refreshing to know that rock still lives in this EDM music age. Danny takes me back to 1976 when bands like Ram Jam, ACDC, Cream and Led Zeppelin defined a generational sound. Danny brings passion and commitment to rock. You can’t beat organic radio play. Danny and his music have proven that in today’s rock world good music gets played on radio. The new album “Hard Life” is all the 1st was and more. You only have to play it once and it digs music worms into your brain and you want more and more.”

This prowess has stuck firmly in our minds throughout the years, so that is why it is with heavy hearts we report Danny Vash’s death. Upon discovering his pancreatic cancer, he was given 6 months to live.

That was five years before he passed, in November 2020. He was a titan of strength. Danny Vash was an incredible fighter, and you can hear that best through the outlet of emotional expression that musicians all share, that of course being his music. “Hard Life” in particular tells you all you need to know in the title – he was never without struggles, but he was always a champ when he took them on, even his last struggle ever. He will be sorely missed.

Danny Vash is a Blue Pie Records USA artist and available at all leading digital retailers on the planet. Search ” danny vash”. You can get all the latest news on Danny Vash at the official Danny Vash site www.dannyvash.com